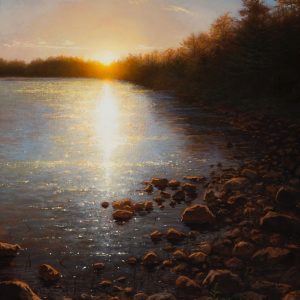 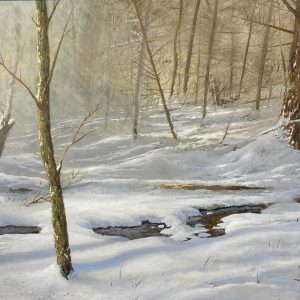 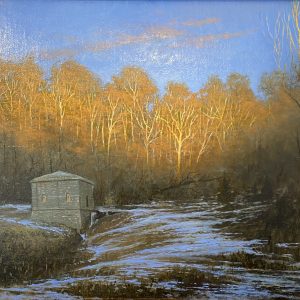 Ken Salaz was born in Southern Claifornia and spent his youth living in numerous locations with his family. After graduating from Cooper Union, Mr Salaz spent several years traveling the world, through Asia, Central and South America, and Europe painting landscapes and making copies of Masterworks at numerous Museums. He continued his education with Leonid Gervitz of the Repin Academy and Nelson Shanks. He trained three years at The Water Street Studio of Jacob Collins and spent two summers with him at the Hudson River Fellowship in the Catskill Mountains. He is currently a Senior Fellow and instructor at the Fellowship. His mastery of technique shows a diverse flexibility of expression, allowing him to capture a wide range of light effects.

In addition, his solid background in traditional techniques used by the “Old Masters” also allows him the groundwork to create works that have a unique poetic expression. His work is held in numerous prominent collections across the United States. His work and processes have been featured numerous times in notable Magazines and Publications such as “Fine Art Connoisseur” and “Plein Air”.

“The sweetest thing in all my life has been the longing…to find the place where all beauty came from.”  The pursuit of classical painting has been a passion all my life. It is a great challenge, a beautiful pursuit and a rewarding gift to myself and those around me. No serious pursuit of the craft and artistry of painting can leave a person indifferent to the mysteries and wonderment of the world around us and within us.